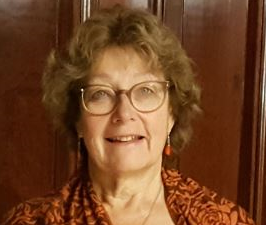 Born in Derby in 1953, Yolanda grew up in West Yorkshire, in the north of England, a region famed for its wild and barren heather-clad landscapes. Her home town was barely a stone’s throw from the windy moors of Haworth, the home of the Bronte sisters. These bleak vistas etched in her a deep and enduring love of nature, heath and moorland.
With an extended family in mainland Europe, USA and Australasia and a multi-lingual father, the love of travel and learning new languages was instilled from an early age along with an enjoyment of amateur dramatics, writing and choral singing. After studying languages at school, then at college in Manchester followed by a stint as an au pair in Geneva, she travelled to Israel where she worked for three years in a multi-national travel agency, firstly in Tel Aviv, then in London and Philadelphia.
In 1979 she returned to academic study, graduating with a BSc (Hons) in Psychology at the University of Bradford in 1982. This led to a period of two years working at the pioneering Caldecott Therapeutic Community in Kent.
In 1984 she relocated to Bristol where she met her husband. They settled in rural Somerset where they established a small holding, raising three children amid ducks, geese, chickens, sheep and apple orchards. It was not quite the Yorkshire moors but was often wild and windy!
In 1992 Yolanda began teaching Psychology, a career which was to span 25 years. In between teaching, raising her family and wild food foraging she turned to writing comic pieces, two of which were featured on BBC Somerset radio.
In recent years, Yolanda has worked as a volunteer presenter on local radio, interviewing guests and delivering her own contributions on a variety of topics.
Following retirement in 2016 Yolanda turned to her late father’s manuscript, “Ferramonti.” Researching his autobiographical novel over the next few years led to regular visits to the Ferrramonti di Tarsia camp museum in Calabria. Through these trips she was lucky and honoured to meet former internees from the 1940s and their descendants. This connection, culminating in the publication of her father’s novel, “Ferramonti: Salvation behind the barbed wire,” has produced one of the most rewarding periods of her life so far, affording Yolanda cherished opportunities to travel to Italy, Israel and South America. Life stories from former internees are now forming the heart of her second publication: “The People of Ferramonti: Then and Now.”