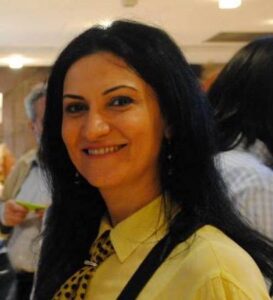 Hanane Aad is a Lebanese poet, journalist (Print media, radio and TV), literary critic and translator. She has lived in Vienna, Austria, since 2009.

She has published a number of books: Banquet of Mercy for the Univers (English) May 2022 (Mumbai, India); Duet of Flowers (Japanese and English), with the Japanese poet Mariko Sumikura, 2016;  in addition to 5 books published in Arabic in Beirut, Lebanon: I Carry my Freedom in my Mouth, 2010; Pearls of the Soul Riding Virtue, 2005; Like a Grain of Wheat, 1998; The Echo of Nostalgia, 1992; Dialogue of Cultures and Love of the Language, 2001.

At the Lebanese daily newspaper An-Nahar, where she worked between 1995 and 2005, as a literary critic and writer, her name is associated with a long series of interviews (1999-2005) with French-speaking authors like Michel Deguy, André Makine, Andrée Chedid, René de Obaldia, Eric-Emmanuel Schmitt, Vénus Khoury-Ghata, Olivier Roy, Tahar Ben Jelloun, Paule Constant, Bruno Etienne, Bruno Chenu, Jean Lacouture and others.

On the occasion of the francophone summit which took place in Lebanon in 2002, she published Dialogue of Cultures and Love of the Language. This book collected 22 of the above-mentioned literary dialogues.

As a translator she translated from French into Arabic the 450-page historical novel about Beirut, entitled The Novel of Beirut by Alexandre Najjar, as well as the novel l’Imposture des mots by Yasmina Khadra.

Manage Cookie Consent
To provide the best experiences, we use technologies like cookies to store and/or access device information. Consenting to these technologies will allow us to process data such as browsing behavior or unique IDs on this site. Not consenting or withdrawing consent, may adversely affect certain features and functions.
Manage options Manage services Manage vendors Read more about these purposes
View preferences
{title} {title} {title}